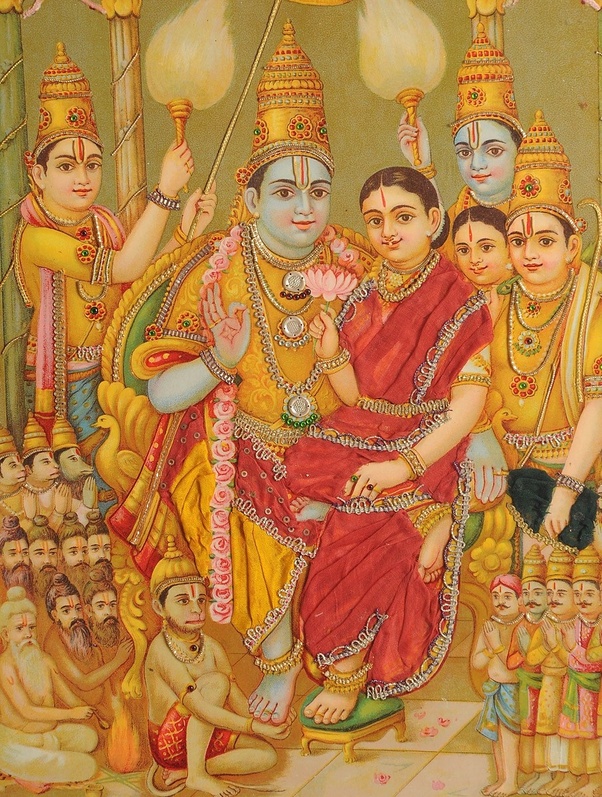 1: By meditating on “Rama Rama Rama” (the Name of Rama), my Mind gets absorbed in the Divine Consciousness of Rama, which is Transcendental,

2: The Name of Rama is as Great as the Thousand Names of God (Vishnu Sahasranama).

In all the emotional hue and cry about Sri Ram temple in ayodhya in today’s supercharged pre election slogan times in India, where everything and anything about Ram Lalla  is about building a Bhavya Sri Ram Mandir to erase the shameful and sad memories of an earlier remnant of Ramadurg {durg means Fort in sanskrit}or Ramkot , a probable palace of Sri Ram destroyed by Baqi Tashqandi , the muslim  lieutenant of invader Babbar.

In this surcharged atmosphere  for the past few days after the announcement in Kumbh by RSS Suresh Bhaiyyaji Joshi that the   building of Sri Ram Mandir will start immediately and would be finished by 2025, I thought it is important for people to go back to sri valmiki’s Ramayana to read for themselves the sargas   when Rama left Ayodhya after being banished by Dasaratha.Many who are hindi speaking or bengali must be having the   respective version of Sri Ramayana in their homes & since its a tradition in north to have a copy in the house and elders reading it often, the  following sargas must be very familiar to them. In the south parayanam of ramayana is not that much prevalent like in north and for people who might not have had an opportunity this  could be a chance to read this and feel the emotion of the banishment .i am sure many eyes will moist with tears when reading this.This was an emotional moment for people of Ayodhya of  at time of banishment when their beloved Sri Rama already known for his extraordinary sense of fairness left them like orphans as it is even today for 1 billion hindus all over the world and in india.

This building of the Ram Temple and consecration of Sri Ram lalla in the grand temple  will be like the return  Of victorious Rama after conquering Ravana in Lanka.It will be  like re establishing Ram Rajya figuratively.Sri Ram was always the moral compass over millennia to hindus, the rebuilding of a great temple will emotionally surcharge the whole hindu population in india and would give a great direction and impetus  in its growth as a world leader. It would also to some extent assuage the always underlying feeling of thousands of years of conquest of hindu land and psyche of its people by muslim invaders. It will be a redemption of sort in hindus perceptions of themselves

The ladies of the royal gymnasium lament over the exile of Rama and others. The citizens of Ayodhya also are reduced to a miserable plight. All Nature mourns at Rama’s departure.

As Rama the tiger among men, having paid obeisance with joined palms departed, a great cry of distress arose among women of inner apartments.

Where is he going, who was the path, who became the protector of the people, who are now defenseless weak and unhappy?”

“Where has he gone, who was not angry even when provoked, who resolved every misunderstanding and who propitiated all those who were angry by sharing their suffering?

That illustrious and great-souled Rama, who treated us with the same reverence he paid to his own mother, where has he gone?”

“Where has he gone, he the protector of the people and the whole world, driven to the forest by the king, goaded on by Kaikeyi? ”

“Alas! In his folly, the king has banished the virtuous the beloved and the strictly truthful Rama to the forest!”

Thus did all the queens lament, like unto cows deprived of their calves and in there affection cried out loudly.

Hearing those terrible crying sounds in the private apartments, the king profoundly afflicted by the departure of his son, became increasingly depressed.

On the departure of Rama to the forest, the sacred fires were no longer performed, no house holder prepared food, the people did not do their acts and even the sun went into eclipse.

Elephants threw out the morsels of food they had taken into their mouths. Cows did not give suck to their calves. Mother did not rejoice, for having got a son born for the first time.

Trisanku, Lohintanga, Brihaspati as also Budha and all other planets assumed a menacing aspect and got stayed with the moon.

Stars ceased to twinkle. Planets were deprived of their splendour. The stars of Visakha appeared in the heaven, veiled in the mist.

The great ocean rose, as by a speed of a long-lasting tempest. While Rama went to the forest, that city was shaken.

All the cardinal points, having been disturbed, were covered by darkness. Planets did not become visible, nor the stars nor any other thing in heaven.

All the people of the city suddenly became apathetic. No one was interested in either food or in pastime.

All the people of Ayodhya, afflicted by grief in succession, heaved profound and burning sighs and bewailed about the departure of the Lord of the earth.

The people in the king’s way were wearing distressed faces filled with tears. No one appeared rejoicing. All were possessed by grief.

The wind was not blowing coolly. The moon did not appear beneficient. The sun did not give out warmth to the earth. The entire world was in disorder

Then, all of Rama’s own friends were bewildered in mind and the weight of their agony overwhelmed them. They did not leave their beds.

Afflicted by fear and grief, the earth with its mountains, deprived of that great souled Rama, suffered a terrible convulsion, as when it is abandoned by Indra the lord of rain, and a great uproar reigned in the city which was filled with elephants, warriors and horses.

Though this picture may be filmy, the scene at the time of Sri Ram leaving Ayodhya with Lakshman and Maa Sita would have been like this, very emotional, people crying and screaming and beseeching him  to stay back or take all of them along with him for the van vaas.

The people devoted to the high- soled Rama of unfailing bravery accompanied him on his way to the forest for exile.

When the king was forced (in the interests of his son) to turn back, the group of friends who were following Rama’s chariot did not return.

Rama who enjoyed great celebrity and who was richly endowed with every virtue, resembling the full moon, had indeed become the favorite for the people living in Ayodhya.

Despite the entreaties of the people of his own, Rama(the scion of the Kakutstha), in order to honor his father’s vow; proceeded towards the forest.

Fondly gazing on the people as though drinking with his eyes, Rama lovingly spoke (as follows) as though they were his own children:

“The respect and affection that has been bestowed upon me by you (the residents of Ayodhya) may for my satisfaction be bestowed in a special measure on Bharata.

“Bharata who enhances the delight of Kaikeyi and who possesses excellent conduct, will indeed do pleasing and beneficial things to you appropriately.”

“Bharata who is matured in knowledge but young in age, who is gentle but endowed with virility and virtue, will become your worthy master who can dispel your fears”

“Bharata who is endowed with royal virtues is being marked as the prince. Further, king’s command is to be carried out by me and the rest of you.

“If you desire to please me, see that the king does not suffer agony when I have gone to forest for exile”

The more Rama the son of Dasaratha, showed himself to be faithful to his duty, the more the people wished to have him as their master “

Rama accompanied by son of Sumitra, drew the people of the city, who were weeping piteously, after him as if tied and pulled with cords.

Those brahmanas, who were triply revered for their learning, their age and their spirituality, their heads shaking with advanced years, cried out :

“Oh Noble Steeds, of speedy breed! You who are carrying Rama, do come back! Do not proceed! Be friendly to your master (since by taking Rama against our wishes, you will be doing a disservice to him)”

“Indeed all things, which are endowed with ears, more so horses, stand appraised of our entreaty. Therefore, you return.”

“That hero of the pure soul, of virtuous and auspicious firm resolve, that master, deserves to be brought back to the city and not to be taken to the forest.”

Seeing those aged brahmanas uttering those painful words, Rama quickly got down from the chariot.

Rama with Sita and Lakshmana, taking close strides, proceeded on foot towards the forest.

That Rama who was affectionate in his disposition and had compassion in his eyes, could not abandon those brahmanas walking on foot, far behind the chariot.

Perceiving Rama still going towards the forest, those brahmanas perplexed in mind and greatly distressed, spoke the following words :

“The whole of this brahmana community is following you, devoted (as you are) to the brahmanas. See, they are bearing the sacred fires on their shoulders”

*-It is laid down in the Vedas that he who performs a Vajpeya sacrifice must be supplied with a white canopy.

“With these canopies of ours, we shall give shade to you, who have got no canopy and are being scored with rays (of the sun.)”

“Oh, Dear child! The intellect of ours, which was forever engaged in perusing the study of Vedic texts has been now made to follow the course of exile to the forest”

“We will carry the Vedas in our hearts as our excellent treasure and our wives too will remain at home, protected by their character”

“We shall not revoke our decision. Our mind is fully determined to go along with you (to the forest). If you do not pay attention to piety, what being will remain devoted to the path of virtue?”

” Oh, prince of resolute conduct! We entreat you by our heads having gray hair like the white color of the swans, that are soiled with dust as a result of their falling on the ground (in the course of our prostration to you) (pray) turn back.”

“Sacrifices have been commenced by many of those Brahmanas that have come here. Their completion, oh dear child, depends on your return”

“Beings both animate and inanimate, Oh, Rama, are indeed devoted to you. Show affection to those devotees, who entreat you to return.”

“The trees held by their roots, unable to accompany you, seen to be weeping, hump-backed by the force of wind”

“Birds too, which sit motionless and are unable to go out in search of food and which remain fixed at one spot on trees, are supplicating you to return, compassionate as you are to all created beings”

While those brahmanas were crying thus with a view to persuading Rama to return, the river Tamasa appeared there, as though retarding the progress of Rama “

Thereafter Sumantra the charioteer too released the horses, tired as they were, from the chariot and quickly making them roll, allowed them to graze not very far from the (bank of) Tamasa once they had drunk water and had their body washed in the river.”

what is it about a hindu? View all posts by sanatanihindu